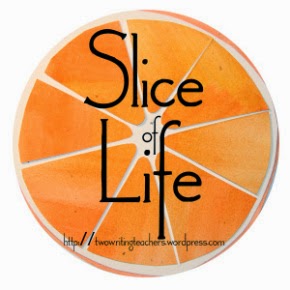 When I was growing up, we had a laundry chute in the house that went from the second floor hallway into the laundry room downstairs.  We always loved to throw our clothes down the chute, which was a brilliant way for my mom to get us to clean up after ourselves.  :)
Eventually my brother, sister and I got the idea that the chute could be used for fun!  We started with our stuffed animals.  One of us would go downstairs and open the cabinet door that the chute was built into and the other one would stand upstairs and yell, "Ready?"  That quickly turned into putting our Adventure People (remember those?)  on a string and helping them to "scale" the mountain that was the chute.
That turned into, "Hey!  What if we went down the chute?"  I think that it may have been my idea originally, but it was quickly accepted by my brother and sister.  Since Greg was the smallest at the time, we decided that we would start with him.  It looked like it was going to be a piece of cake until...  he was holding on to the outside of the chute, legs dangling toward the first floor.  We thought it might not be such a good idea...  We decided to pull him out, but he wouldn't come out as easily as he had gone in.  I decided that I was going to go downstairs to catch him.  I opened the cabinet door, threw all of the dirty clothes on the floor and put myself into the shoot to reach up to my brother.  I didn't think it was going to work because I could hear my sister saying, "Just let go" to my brother's "NOOOOOO".  :)  I reached up and grabbed his little foot and gave a tug.  I told him I was right there and I wouldn't let him fall.  I hear the telltale sound of him sliding his little body through the chute.  I didn't anticipate a curve in the chute, but no worries!  I grabbed his little foot and PULLED!  He slid down the chute and out into the cabinet.  It's funny... That was quite an adventure for the three of us as we laughed and prayed that we would get Greg out before our parents came home, but we never spoke of it again.
Posted by Unknown at 3:16 PM