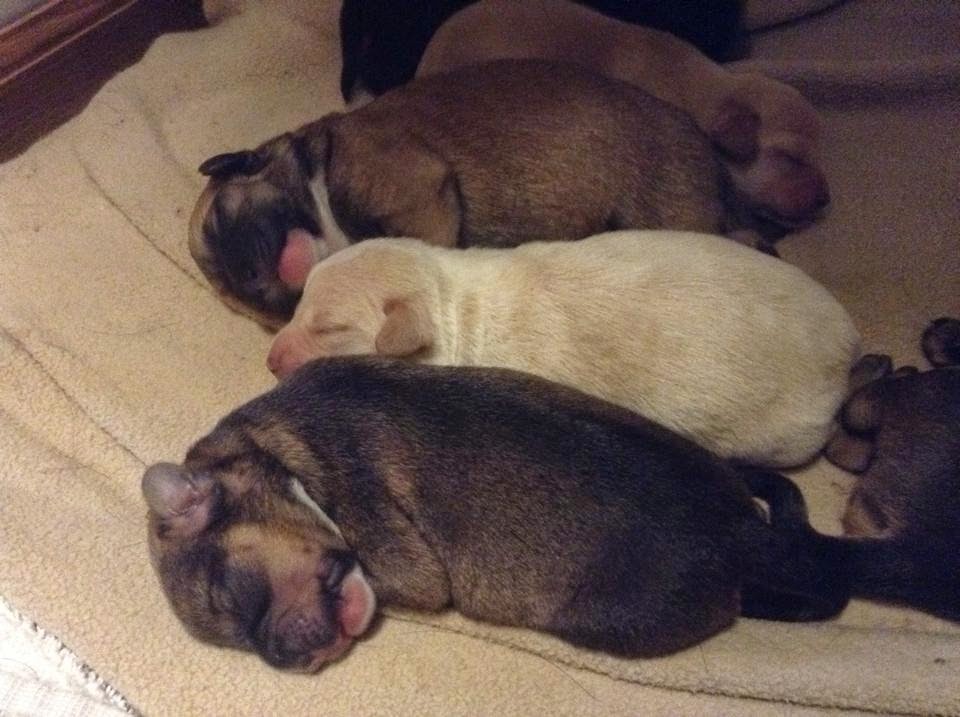 This sweet little pile of goodness brings me so much joy!!!  I could watch them for hours.  They don't do much right now, but they are so innocently sweet.  They are only 4 days old and they are very similar to newborn babies.  They eat, sleep and snuggle.  Just like when my children were wee little, I am in awe of them.  It is amazing that they would grow and develop into these diverse little darlings.  I can't wait until they open their eyes and start playing!!! 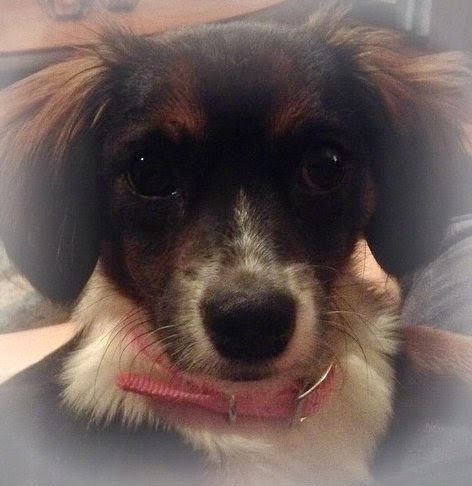 We didn't plan on the puppies.  This is Holly.  She is a foster dog that I care for and love until she is adopted by a loving family.  She was pulled from a kill shelter on the day that she was going to be euthanized.  I am so grateful that Danielle from Dash Animal Rescue saved her!  She is such a sweet little girl.  She is only a puppy herself at only 9 months old.
When she first came to stay with us, she was a very sick little girl.  She had Kennel Cough and couldn't hold anything down.  She didn't have an appetite and slept all the time.  Little did we know that she was experiencing morning sickness while sick with kennel cough.
After a few weeks we noticed that she was gaining weight and we thought it was because she was getting better.  When she started to change in ways that only a pregnant dog could I took her to the vet.  Dr. Kelleher performed an ultrasound and we learned that she was pregnant with at least three!  This was not good news since she was only a puppy and since there are so many dogs and puppies without a home to call their own.  I couldn't help it though... I was excited!  :)
Since we didn't know when she became pregnant we really didn't know when she would deliver.  We read up online and learned that she was at least 45 days along since we saw the spines on the ultrasound and dog gestation is 63 days.   She would have her puppies within a 20 day period.
I started to read all about dogs giving birth and how to help.  I learned that sometimes mommy dogs don't get their puppies out in time and they die from suffocation.  I hoped and prayed that she would deliver when I was awake and home from work.
Well... prayers aren't always answered and the night before she was going to see the vet, Holly woke us all up with loud yelps!  I ran into my son's room and there was a puppy on the floor still in the sack and the second puppy was already being born.  I knew what to do!  With only a slight hesitation, I grabbed the sack and ripped it open.  I didn't think that I had made it in time as the puppy lay lifeless in my arms, but then she took a BIG breath and started to move.  Whew!
Holly continued to deliver puppy after puppy after puppy... She had SEVEN in all!!!!  I know that dogs sometimes have bigger litters, but Holly is only 11 pounds herself!  One of the puppies was stillborn, which was so so sad.  I know that Holly did her very best and that is what is important.
I have to laugh at myself because I worry about those puppies just like I did my own children.  Are they warm enough?  Are they eating enough?  Are they sleeping enough or too much?  It is so joyful and so unnerving all at the same time.  :)  Only one of the puppies has a name and that is Mac.  He has the name Mac because he is half the size of his brothers and sisters so I call him that because he is the absolute opposite of being the size of a Mack Truck.  LOL
I look so forward to the coming weeks and all of the changes that the puppies will go through!  I am going to try to post a video when they start running around. They will be SO cute!